The Jenga arcade game, known and liked by everyone, in a colorful version for kids with cheerful worms. We are sure that this proposal of a fantastic logic-arcade game will make you spend time with friends and family in a very joyful setting, and positive emotions will grow with each new layer of colorful jenga worms on the tower.

The general rules of this game are very simple. Build the tower together, and then start pulling one worm one at a time from the tower, placing it on top so that the building does not fall apart. The person who knocks over the intricate structure is the loser, and the last player to put the brick on top, leaving the rook in its entirety, wins.

There are different game variants:

- version 1: the goal of the players is to retrieve one brick from any floor of the tower, and then place it on the top of the tower - in this version, we play without a cube,

- version 2: the goal of the players is to pull the worm from the level indicated by the cube, for example, 4 stitches are thrown on the cube - take any block from the fourth row and place it on the top of the tower,

- version 3: the goal of the players is to pull out the worm indicated by the cube, for example, 5 points are thrown on the cube, count the blocks from the bottom and pull out 5 blocks in turn,
which we then place on top of the tower.

Dimensions of the game elements:

Size of the package: 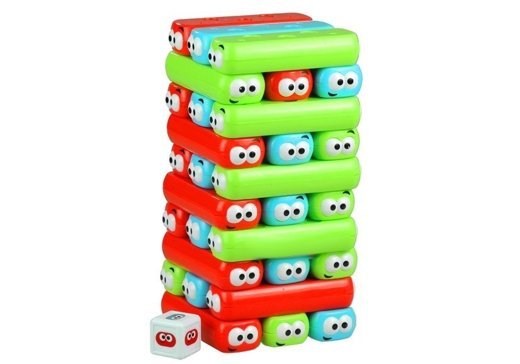