Family Game Who is it?

To start a game you should at first sit a players opposite to themselves. Every player should has a spreaded console in the front. Next step is opening all of the windows, then placing in them cards with various images of characters. We can play!

Rules of this game are very simple - the task of each player is guessing as fast as it is possible a face, which your opponent chose. Ask as many questions as it is necessary, to recognise the right face. Answer on them only with YES or NO. Remember about one important thing - you have to recognise it first! Perceptivity and careful looking at all of the faces which are on the board with connection in one, clever question could eliminate few cards at one blow. The title of the best detective will receive that person, which will win five rounds.

How to create questions and eliminate the faces on cards? For example with questions:

- does your character has a black hair?

- is your character a girl?

-does your character wear glasses?

Funny logical game Who is it? will awake the imagination, teach a baby logical thinking and also will show how to construct and raise questions in right way. A game in character like this will certainly learn a several years old child positive social relations, the same as useful in life: inquisitiveness and ingenuity.

The game consists of:

- 2 consoles in red and blue colour

- instruction which includes the rules of this game

Dimensions of stands to the game: 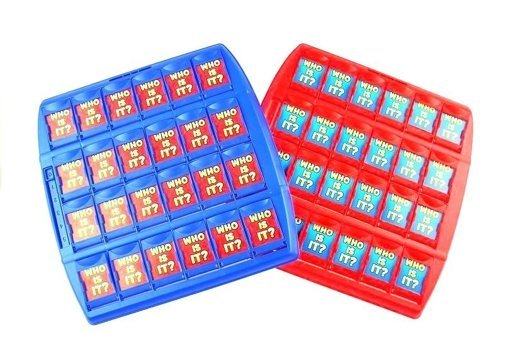