Toys imitating guns are elements that often appear in boys' games. They diversify the game, while helping to play out various play scenarios. These are also elements that help you feel the role of brave warriors and heroes straight from crime movies. The presented rifle with water cartridges will surely keep young boys for long hours, and will also allow them to arrange many interesting games, for which the idea will come from their imaginations.

The children's water ammunition gun is made of an approved material, which is plastic. Its structure resembles that of a real weapon, but it is very safe - it has no sharp ends and elements. The handling of the toy is very simple, but it is very fun. In order to be able to shoot water balls, the included 6 V battery should be placed in the pistol and then the ON/OFF switch must be moved. After placing the water ammunition in the cartridge case, focus, target and squeeze the trigger. Great fun guaranteed!

The set includes five ammunition packages - each containing 300 BBs. Don't be confused by their dimensions - to turn the marbles into water bullets, place them in a bowl with about 180 ml of water, and then leave them there for 4 hours or more. After the time has elapsed, the balls will change in size, reaching dimensions of 9-11 mm. The cartridges exposed to heat may shrink, but to restore them to a larger size, put them back in the bowl of water.

We believe that the presented water cartridge rifle is a great gift for a boy. The use of water balls as ammunition significantly increases the level of play safety, and will also make children more willing to play outdoors. Another advantage is the rechargeable power supply, which significantly reduces the operating costs of the toy - after discharging the battery, it must be recharged to be able to continue playing.

The gun is intended for all children over 3 years of age. It was made of certified, safe materials of the highest quality, thanks to which it is marked with the CE certificate, and its production complies with the EN 71 standard. The gun with the accessories attached to the set is packed in a dark, aesthetic box with a transparent glass-case. There is a handle on the top that makes it easy to carry the water gun.

Dimensions of selected elements of the set: 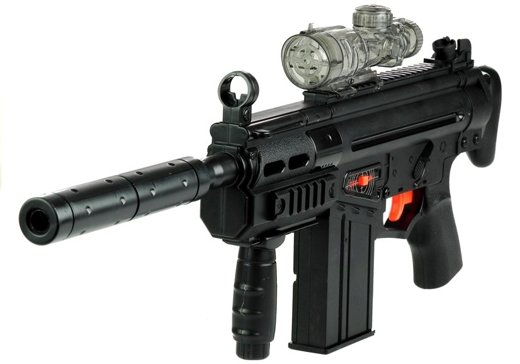